Five buddies and I backpacked in Goat Rocks in the summer of 2018. We arrived at Heart Lake around midday in bright sunshine, and enjoyed a swim in the lake. I poked around a bit looking for a photo opportunity for sunset, but the clouds were building so I went ahead and took this image in case sunset didn’t happen.
(About an hour later, the longest hail storm I’ve ever been in hit; it lasted for well over an hour. This hadn’t been in the forecast, and we weren’t expecting it. We had pitched in a dry part of the lake bed, and two of us ended up with water swallowing the floor of their shelter; the rest of us weren’t doing well either. We decided it would be best to hike out then, rather than the next day as planned. It was a wild ride; the trail was a stream, the hail was miserable, and lightning was booming all around. The biggest danger was getting hit by rolling debris while crossing Lily Basin, because the streams coming off the mountain were raging and eroding rocks. Fortunately, we made it out with nothing more than our pride injured, although we didn’t get back home until the early morning.)
NIKON CORPORATION NIKON D7100, f/16 @ 12 mm, 1/10, ISO 140, No Flash
John W. Williams, DVM 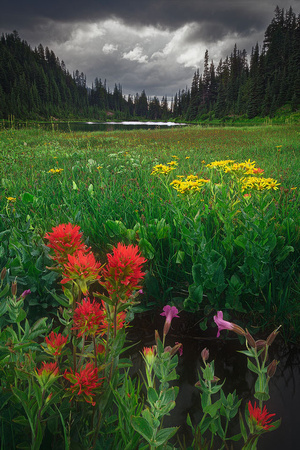