In early August of 2019, several buddies and I backpacked into Cowlitz Park on Mt. Rainier for a long weekend. The flowers were thick and the vistas spectacular, and the weather even cooperated a time or two.

Our first night in Cowlitz Park we set up camp near a tarn, and after scouting for a few hours I settled on a composition with a lupine foreground. I went back to the location in late afternoon hoping to catch a sun star against Mt. Rainier, as insurance in case sunset was a dud. When I arrived though, I found the sun had already set behind a foreground ridge and my flowers were in shadow. I kicked back and enjoyed the beauty for a while, hopeful as the light got a bit more interesting that sunset might work out. Just as things started to get a bit more interesting, mist came pouring into the scene and I found myself sitting in thick fog. Grumbling under my breath about the unfairness of it all (to quote Jud from the BBC television show Poldark, “Tisn’t right, tisn’t fit, tisn’t fair, tisn’t proper!”), I packed up and headed back to camp to start supper.

Just as I started to eat, the fog cleared and the sky color started to look promising. For a moment I considered dashing back down the hill, but the lupine was a distance away and I knew there wasn’t time to get there and get set up before the show was over. (Tisn’t right, tisn’t fit, tisn’t fair, tisn’t proper!”)

However when scouting I had also poked around a lot of other possible compositions, and one I had considered was this patch of Pink Mountain-heath. It was only about 50 yards down the slope from camp, so I set supper aside and rushed down to set up this composition. …then, in a flash, the fog rolled back in. With a sigh (and a few more “tisn’ts”), I walked back up and started eating again.

I was starting to catch on though, and left the camera and tripod set up. It turns out that the clouds rapidly lifting and falling at that elevation would be a common theme for th
FUJIFILM X-T30, f/16, 1s, ISO 160, No Flash
© John W. Williams 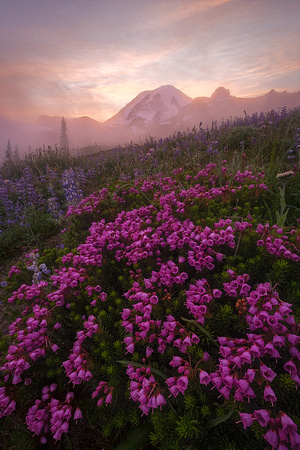